In our 13.8 billion-year-old universe, most galaxies like our Milky Way form gradually, reaching their large mass relatively late. But a new discovery made with the Atacama Large Millimeter/submillimeter Array (ALMA) of a massive rotating disk galaxy, seen when the universe was only ten percent of its current age, challenges the traditional models of galaxy formation. This research appears on 20 May 2020 in the journal Nature.
share
tweet 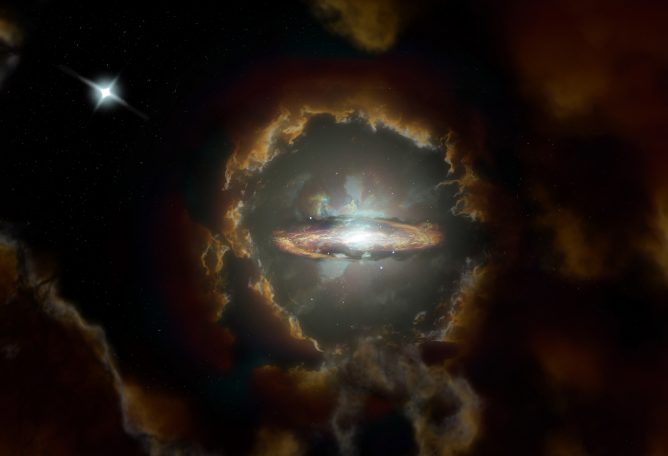 Galaxy DLA0817g, nicknamed the Wolfe Disk after the late astronomer Arthur M. Wolfe, is the most distant rotating disk galaxy ever observed. The unparalleled power of ALMA made it possible to see this galaxy spinning at 170 miles (272 kilometers) per second, similar to our Milky Way.

“While previous studies hinted at the existence of these early rotating gas-rich disk galaxies, thanks to ALMA we now have unambiguous evidence that they occur as early as 1.5 billion years after the Big Bang,” said lead author Marcel Neeleman of the Max Planck Institute for Astronomy in Heidelberg, Germany.

The discovery of the Wolfe Disk provides a challenge for many galaxy formation simulations, which predict that massive galaxies at this point in the evolution of the cosmos grew through many mergers of smaller galaxies and hot clumps of gas.

“Most galaxies that we find early in the universe look like train wrecks because they underwent consistent and often ‘violent’ merging,” explained Neeleman. “These hot mergers make it difficult to form well-ordered, cold rotating disks like we observe in our present universe.”

In most galaxy formation scenarios, galaxies only start to show a well-formed disk around 6 billion years after the Big Bang. The fact that the astronomers found such a disk galaxy when the universe was only ten percent of its current age, indicates that other growth processes must have dominated.

“We think the Wolfe Disk has grown primarily through the steady accretion of cold gas,” said J. Xavier Prochaska, of the University of California, Santa Cruz and coauthor of the paper. “Still, one of the questions that remains is how to assemble such a large gas mass while maintaining a relatively stable, rotating disk.”

The team also used the National Science Foundation’s Karl G. Jansky Very Large Array (VLA) and the NASA/ESA Hubble Space Telescope to learn more about star formation in the Wolfe Disk. In radio wavelengths, ALMA looked at the galaxy’s movements and mass of atomic gas and dust while the VLA measured the amount of molecular mass – the fuel for star formation. In UV-light, Hubble observed massive stars. “The star formation rate in the Wolfe Disk is at least ten times higher than in our own galaxy,” explained Prochaska. “It must be one of the most productive disk galaxies in the early universe.” 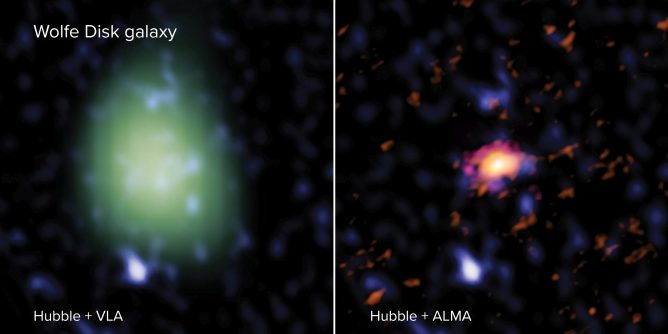 The Wolfe Disk as seen with ALMA (right – in red), VLA (left – in green) and the Hubble Space Telescope (both images – blue). In radio light, ALMA looked at the galaxy’s movements and mass of atomic gas and dust and the VLA measured the amount of molecular mass. In UV-light, Hubble observed massive stars. The VLA image is made in a lower spatial resolution than the ALMA image, and therefore looks larger and more pixelated.
Credit: ALMA (ESO/NAOJ/NRAO), M. Neeleman; NRAO/AUI/NSF, S. Dagnello; NASA/ESA Hubble

The Wolfe Disk was first discovered by ALMA in 2017. Neeleman and his team found the galaxy when they examined the light from a more distant quasar. The light from the quasar was absorbed as it passed through a massive reservoir of hydrogen gas surrounding the galaxy – which is how it revealed itself. Rather than looking for direct light from extremely bright, but more rare galaxies, astronomers used this ‘absorption’ method to find fainter, and more ‘normal’ galaxies in the early universe.

“The fact that we found the Wolfe Disk using this method, tells us that it belongs to the normal population of galaxies present at early times,” said Neeleman. “When our newest observations with ALMA surprisingly showed that it is rotating, we realized that early rotating disk galaxies are not as rare as we thought and that there should be a lot more of them out there.”

“This observation epitomizes how our understanding of the universe is enhanced with the advanced sensitivity that ALMA brings to radio astronomy,” said Joe Pesce, astronomy program director at the National Science Foundation, which funds the telescope. “ALMA allows us to make new, unexpected findings with almost every observation.”

This article is based on the NRAO’s press release “ALMA Discovers Massive Rotating Disk in Early Universe” issued on 20 May 2020.