Right now, astronomers are attempting to take the first image of the event horizon of the supermassive black hole at the centre of the Milky Way — but what exactly are black holes?

Black holes are some of the most bizarre and fascinating objects in the Universe. Essentially, they’re reality-bending concentrations of matter squeezed into a very tiny space, creating an object with an immense gravitational pull. Around a black hole is a boundary called an event horizon — the surface beyond which nothing can escape the black hole’s clutches, not even light.

Take a tour of the anatomy of a black hole with our handy infographic: 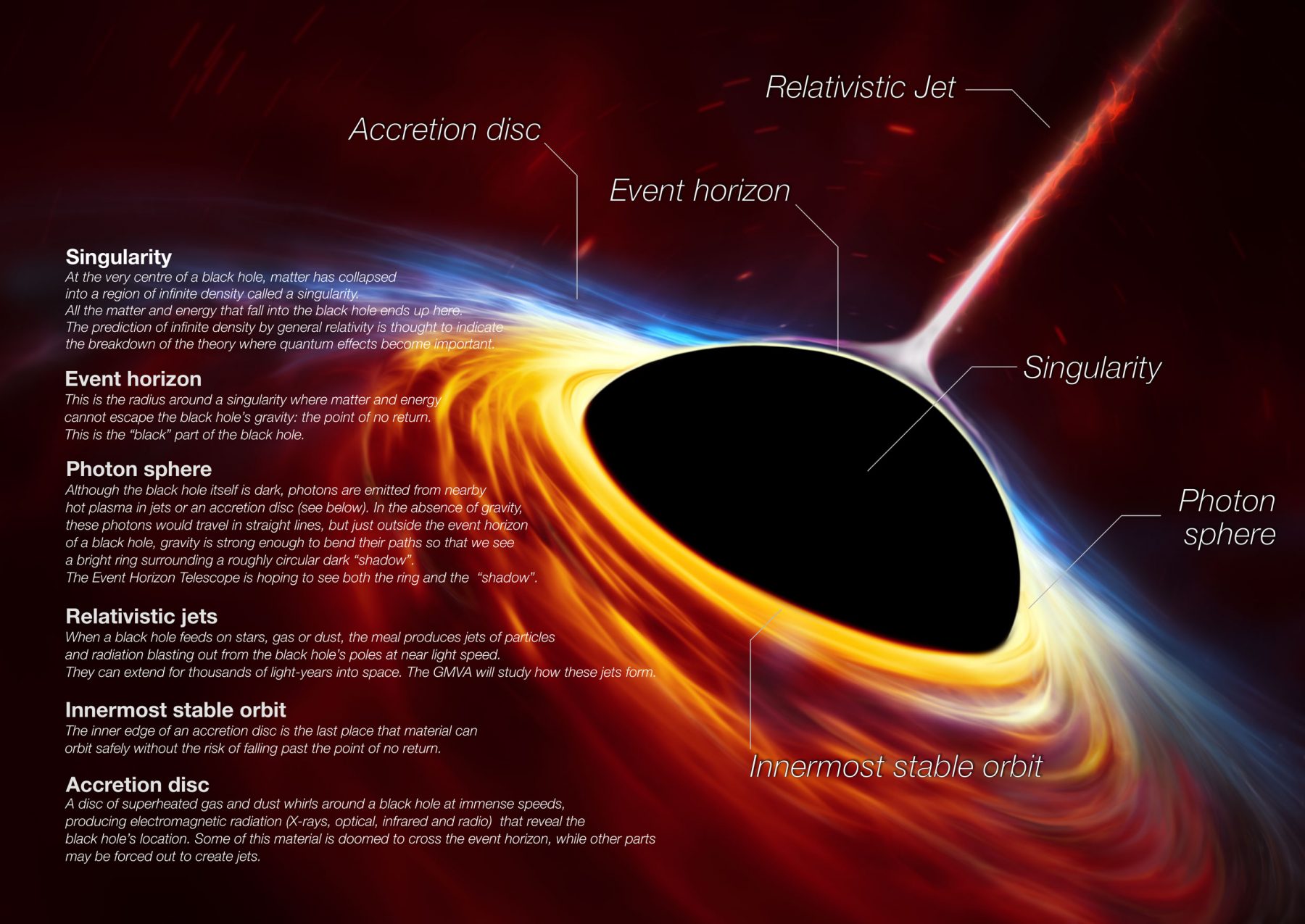 Since no light can escape from a black hole, we can’t see them directly. But their huge gravitational influence gives away their presence. Black holes are often orbited by stars, gas and other material in tight paths that become more crowded and frantic as they’re dragged closer to the event horizon. This creates a superheated accretion disc around the black hole, which emits vast amounts of radiation of different wavelengths.

By observing this radiation from the activity around black holes, astronomers have determined that there are two main types: stellar mass and supermassive.

A stellar mass black hole is the corpse of a star more than about 30 times as massive as our Sun. At the end of its life, such stars violently collapse and don’t stopped collapsing until all of their constituent matter has condensed down into an unimaginably tiny space. It’s easiest to discover stellar mass black holes that are part of an X-ray binary system, where the black hole is guzzling down material from its companion star. 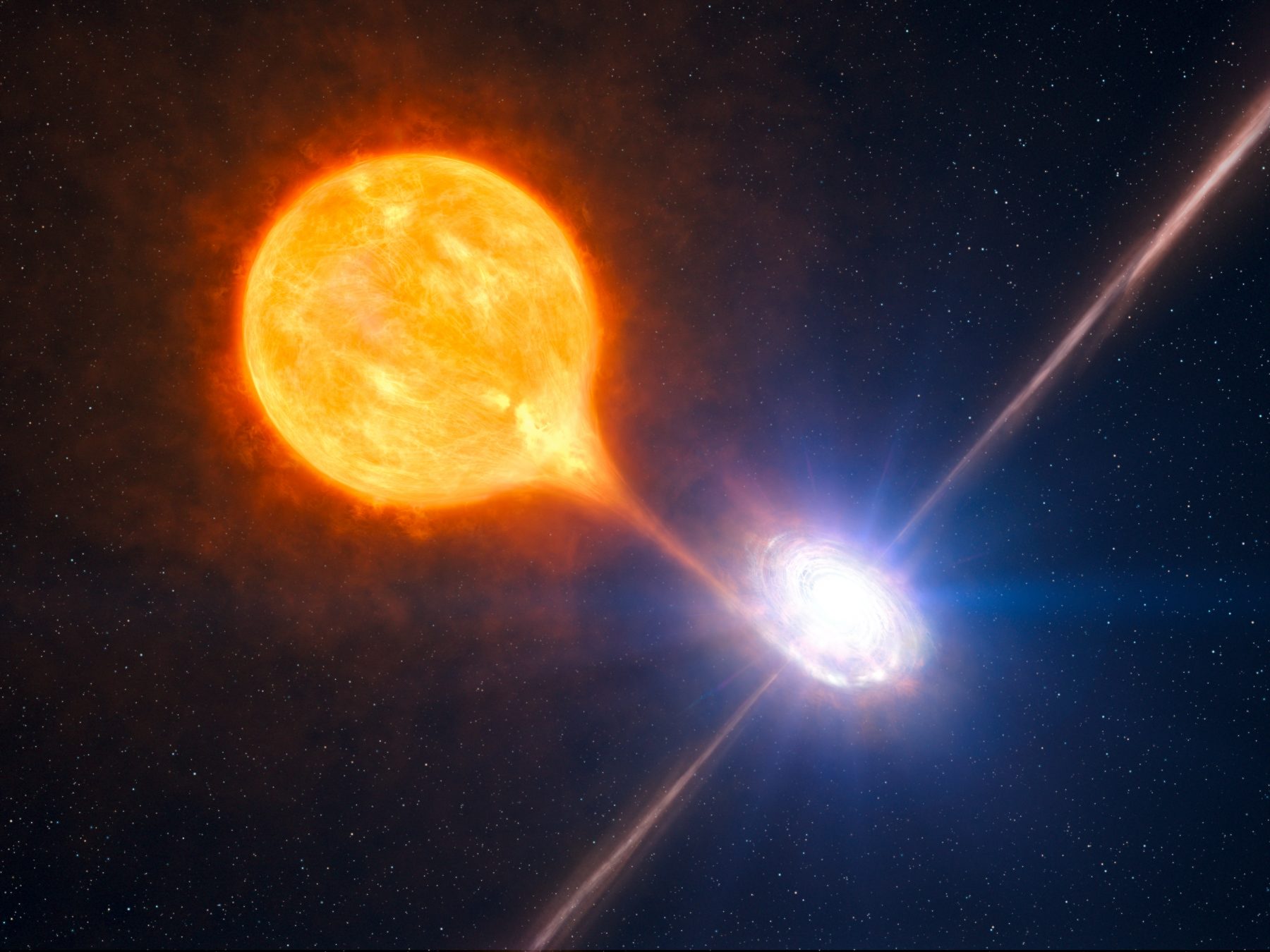 Artist’s impression of the formation of a stellar black hole in a binary system. Credit: ESO/L. Calçada/M.Kornmesser

The second type is called a supermassive black hole. These gargantuan black holes are up to billions of times more massive than an average star, and how they formed is much less clear and is a matter of ongoing study. One theory proposes they formed from enormous clouds of matter that collapsed when galaxies first formed; another theory suggests that colliding stellar mass black holes can merge into one enormous object.

Today, these supermassive monsters reside at the centres of almost every galaxy — including our own Milky Way. They exert tremendous influence on their home galaxies, especially when they gorge on gas and stars. 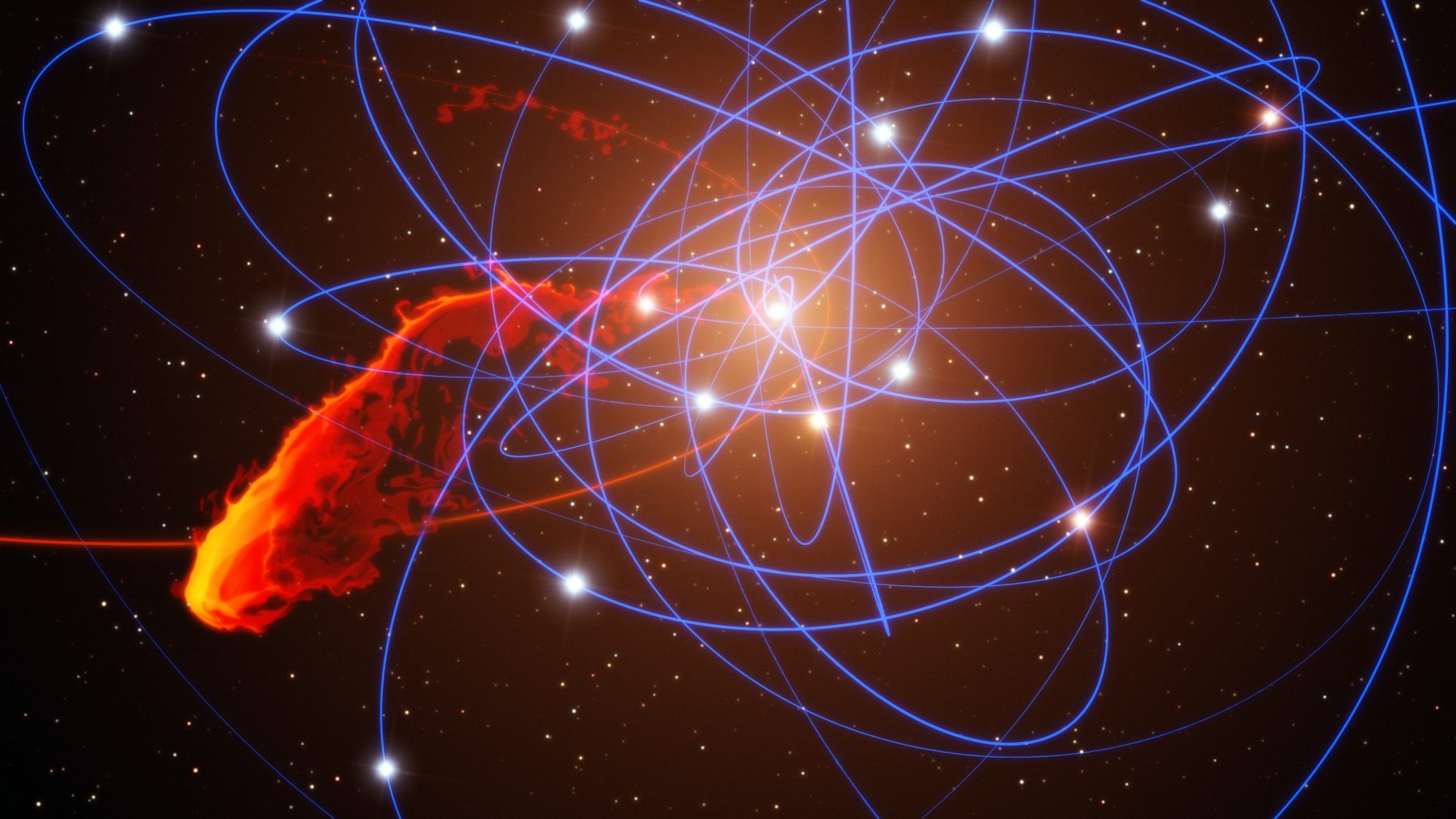 Artist’s impression of a gas cloud after a close approach to the black hole at the centre of the Milky Way. The star orbiting the black hole are shown, along with blue lines that mark their fast, tight orbits.
Credit: ESO/MPE/Marc Schartmann

26,000 light-years away from Earth, Sagittarius A* (Sgr A* for short) is the supermassive black hole in the hot, violent centre of the Milky Way. It’s over 4 million times more massive than our Sun, over 20 million kilometres across, and is spinning at a large fraction of the speed of light. It’s shrouded from optical telescopes by dense clouds of dust and gas, so observatories that can observe different wavelengths — either longer (such as ALMA) or shorter (X-ray telescopes) — are essential to study its properties.

Soon, through the combined power of ALMA and other millimetre-wavelength telescopes across the globe, we may become much better acquainted with the monstrous heart of our galaxy. The Global mm-VLBI Array is currently investigating the process of how gas, dust and other material accrete onto supermassive black holes, as well as the formation of the extremely fast gas jets that flow from them. The Event Horizon Telescope, on the other hand, is working towards a different goal: imaging the shadow of the event horizon, the point of no return.

This is the third post of a blog series following the EHT and GMVA projects. Stay tuned to find out more about why the event horizon of a black hole is so interesting!