Eiji Akiyama, a specially-appointed assistant professor at the NAOJ Chile Observatory, received the “Best Researcher 2016” from the Japanese Society for Planetary Sciences. From September 27 through 29, the Japanese Society for Planetary Sciences held its autumn meeting at Osaka University, where Akiyama gave a commemorative speech titled “Aspect of Protoplanetary Disks and Planetary Systems Revealed by Observations” and the award ceremony was held. 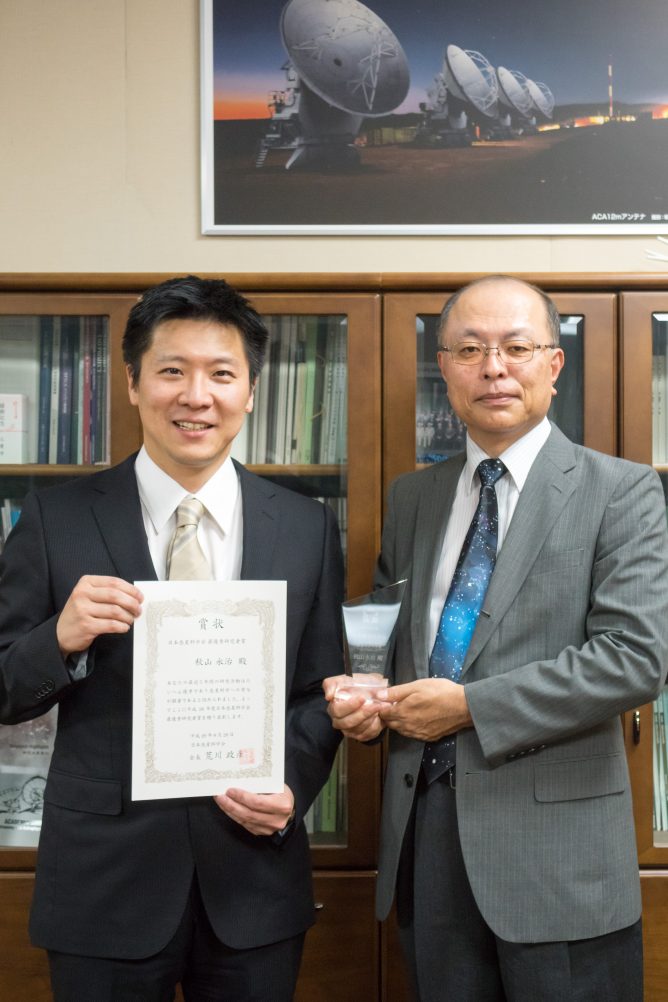 The awardee of the Best Researcher 2016 by the Japanese Society for Planetary Sciences, Eiji Akiyama, a specially-appointed assistant professor at the NAOJ Chile Observatory (left) and the recommender, Masahiko Hayashi, Director General of NAOJ (right).
Credit: NAOJ

Akiyama has been studying the planetary formation through observations of the gas and dust disk structure around a young star, called “protoplanetary disk” using ALMA and Subaru telescope operated by NAOJ in Chile and Hawai`i respectively. Akiyama discovered a disk gap, which was revealed for the first time, in a young star TW Hydrae with Subaru. Based on his original data analysis, he is now conducting research of HL Tau and TW Hydrae whose detailed images were obtained with ALMA. Akiyama was awarded for his outstanding research achievements that contributed to the development of planetary sciences.

“Thanks to the support of many people, I could receive such an honorable award. With the advent of revolutionary telescopes such as ALMA in rapid succession, dramatic progress has been made in planetary sciences and the topic of our scientific discussions extended to other planetary systems and even to space life. I have a higher aim as a researcher and will make further scientific results in exploring our solar system and Earth and identifying the origin of life so as to live up to the expectations of people who have supported me so far,” Akiyama said.

And the Best Presentation Speaker 2017, an award for students, was given to the presentation titled “Possibility to locate the position of the H2O snowline in protoplanetary disks through spectroscopic observations with ALMA” by Shota Notsu at Kyoto University. Akiyama also supports the study as a research collaborator. These awards shows that ALMA has been making a big impact on the study of planetary forming regions.