Using the Atacama Large Millimeter/submillimeter Array (ALMA) astronomers have unambiguously detected the presence of a diskaround a planet outside our Solar System for the first time. The observations will shed new light on how moons and planets form in young stellar systems.
share
tweet

This ALMA image shows wide (left) and close-up (right) views of the moon-forming disk surrounding PDS 70c, a young Jupiter-like planet. The close-up view shows PDS 70c and its circumplanetary disk center-front, with the larger circumstellar ring-like disk taking up most of the right-hand side of the image. The star PDS 70 is at the center of the wide-view image on the left.
Credit: ALMA (ESO/NAOJ/NRAO)/Benisty et al.

“Our work presents a clear detection of a disk in which satellites could be forming,” says Myriam Benisty, a researcher at the University of Grenoble, France, and at the University of Chile, who led the new research published today in The Astrophysical Journal Letters. “Our ALMA observations were obtained at such exquisite resolution that we could clearly identify that the disk is associated with the planet and we are able to constrain its size for the first time,” she adds.

The disk in question, called a circumplanetary disk, surrounds the exoplanet PDS 70c, one of two giant, Jupiter-like planets orbiting a star nearly 400 light-years away. Astronomers had found hints of a “moon-forming” disk around this exoplanet before but, since they could not clearly tell the disk apart from its surrounding environment, they could not confirm its detection — until now [1] Please refer the research result ““Moon Forming” Circumplanetary Disk Discovered around Young Planet in Distant Star System” published on July 12, 2019.
.

In addition, with the help of ALMA, Benisty and her team found that the disk has about the same diameter as the distance from our Sun to the Earth and enough mass to form up to three satellites the size of the Moon.

But the results are not only key to finding out how moons arise. “These new observations are also extremely important to prove theories of planet formation that could not be tested until now,” says Jaehan Bae, a researcher from the Earth and Planets Laboratory of the Carnegie Institution for Science, USA, and author on the study. 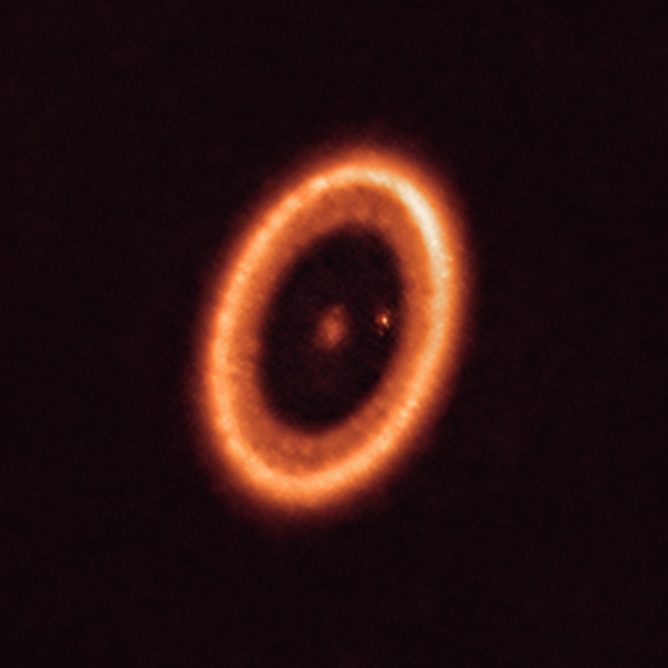 This image taken with ALMA shows the PDS 70 system, located nearly 400 light-years away and still in the process of being formed. The system features a star at its center and at least two planets orbiting it, PDS 70b (not visible in the image) and PDS 70c, surrounded by a circumplanetary disc (the dot to the right of the star).
Credit: ALMA (ESO/NAOJ/NRAO)/Benisty et al.

Planets form in dusty disks around young stars, carving out cavities as they gobble up material from this circumstellar disk to grow. In this process, a planet can acquire its own circumplanetary disk, which contributes to the growth of the planet by regulating the amount of material falling onto it. At the same time, the gas and dust in the circumplanetary disk can come together into progressively larger bodies through multiple collisions, ultimately leading to the birth of moons.

But astronomers do not yet fully understand the details of these processes. “In short, it is still unclear when, where, and how planets and moons form,” explains ESO Research Fellow Stefano Facchini, also involved in the research.

“More than 4000 exoplanets have been found until now, but all of them were detected in mature systems. PDS 70b and PDS 70c, which form a system reminiscent of the Jupiter-Saturn pair, are the only two exoplanets detected so far that are still in the process of being formed,” explains Miriam Keppler, researcher at the Max Planck Institute for Astronomy in Germany and one of the co-authors of the study [2] Despite the similarity with the Jupiter-Saturn pair, note that the disc around PDS 70c is about 500 times larger than Saturn’s rings..

“This system therefore offers us a unique opportunity to observe and study the processes of planet and satellite formation,” Facchini adds.

PDS 70b and PDS 70c, the two planets making up the system, were first discovered using ESO’s Very Large Telescope (VLT) in 2018 and 2019 respectively, and their unique nature means they have been observed with other telescopes and instruments many times since.

The latest high resolution ALMA observations have now allowed astronomers to gain further insights into the system. In addition to confirming the detection of the circumplanetary disk around PDS 70c and studying its size and mass, they found that PDS 70b does not show clear evidence of such a disk, indicating that it was starved of dust material from its birth environment by PDS 70c.

This article is based on the press release issued by the European Southern Observatory on July 22, 2021.

More information
This research was presented in the paper “A Circumplanetary Disk Around PDS 70c” to appear in The Astrophysical Journal Letters. 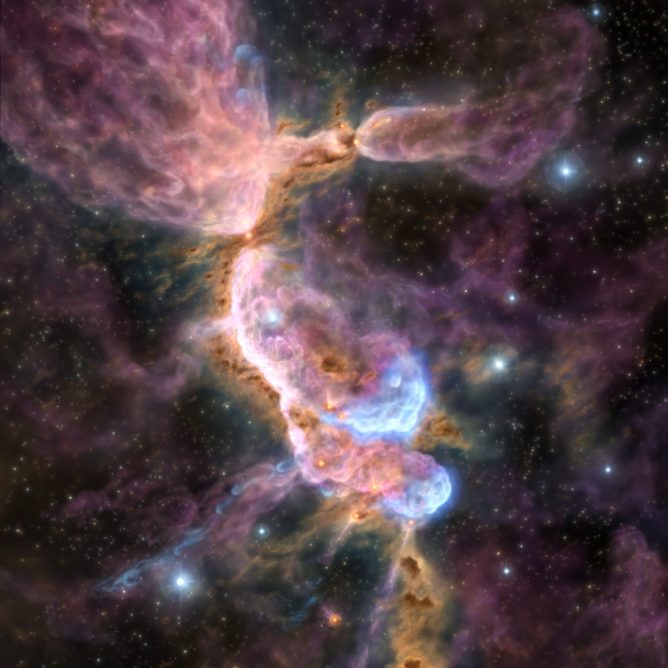