Published in the July 2010 issue of NAOJ News (monthly newsletter) 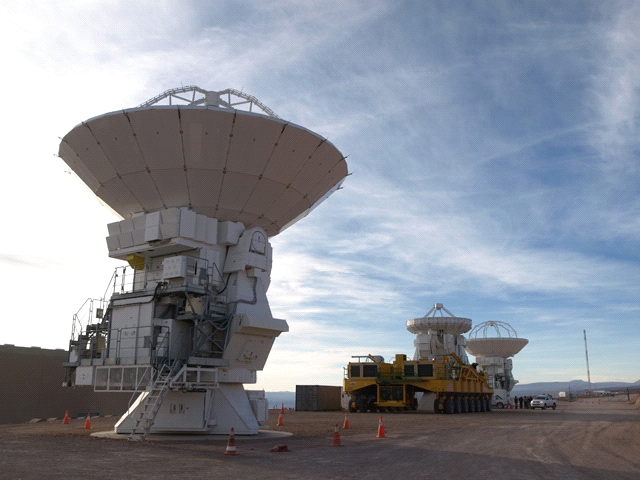 Figure 1: ACA 12-m antenna (front) and ACA 7-m antenna on the transporter (back). The 7-m antenna looks like a robot, since its main reflector is mounted on the big yoke structure which is nearly the same size as that of the 12-m antenna. At present, the first 7-m antenna has just arrived at the Operations Support Facility (OSF).

The technical requirements for the ACA antenna are very strict, because it will be operated in extremely harsh conditions. As you may know, the radio telescope performs observation any time day or night without protection against external environment (unlike an optical telescope that is shielded by a dome structure). This means the radio telescope continues observation even under the scorching sun, or in strong winds, except when the wind velocity is beyond the specified range. The ACA antenna needs to satisfy surprisingly high technical requirements under the environmental condition with the wind velocity of 6 m/s (with solar radiation) or 9 m/s (without solar radiation). Besides, the specifications of ALMA are defined not as best values obtained in a best possible condition, but as normal operating conditions.

Here, I will explain the technical requirements of the ACA 12-m antenna. First is tracking accuracy. The ACA 12-m antenna tracks the target object with an accuracy of 0.6 arcseconds (1 arcsecond corresponds to 1/3600 degrees) or better. Such a high accuracy is needed to obtain highly-reliable radio images with a combination of the ALMA interferometer and single-dish antennas. The surface accuracy of the ACA antenna is below 25 ?m including the measurement error of 10 ?m. In spite of this rigorous requirement, the completed ACA 12-m antenna has already achieved the surface accuracy of 7.4 ?m, which would be the best performance ever achieved by a millimeter/submillimeter telescope. However, this record is likely to be broken by the ACA 7-m antenna this year.

Another difficulty in the antenna development comes from the ALMA’s capability for the solar observations. Normally, radio telescopes, except a few for special purposes, do not observe the Sun or even avoid the direction close to the Sun for safety reason. Since the radio telescope is not protected by the dome-like structure unlike the optical telescope, the subreflector is highly heated by the collected sunlight and might catch a fire, if the telescope is directed to a position close to the Sun. In fact, there was an incident where a fire broke out from the cable connecting to the subreflector of a telescope overseas. The ACA antenna has a special surface to scatter visible light and collect radio waves only. I think the ACA antenna directed to the Sun is really beautiful.

As ALMA is an international project, we need to control the antenna design and manufacturing process in accordance with the international standards of product assurance, safety, and Electromagnetic Compatibility (EMC). My task as the antenna team leader was to understand these standards (this is a really tough job), and then find out how to apply them to the actual antenna design. Thanks to all the people who had supported me, I managed to find a way through long and extensive discussions.

When the antenna design was fixed after great effort and struggle, we held the design review in Mitaka inviting reviewers including antenna specialists and engineers to check the antenna interfaces. At the design review, the reviewers pointed out technical risks and interface problems in detail, and presented many action items. We addressed these action items together with the antenna manufacturer and solved difficult problems one by one. As a result of our persistent efforts, the first 12-m antenna was finally handed over to NAOJ in 2007. During these periods, I was really busy with a pile of e-mails, many phone calls, and meetings, and had to frequently leave the office late at night. While going home on the last train, I had a feeling of fellowship because the train was always crowded with people who had just finished working just like me.

I led the NAOJ ALMA Antenna Team from 2005 to 2006. Our team at the time included many highly competent persons such as Ukita-san, Ezawa-san, Ikenoue-san, Inatani-san, and Yamada-san. Although I was a young and hasty team leader, they always gave me encouragement and support. I would like to close this article by expressing my appreciation for the support of all those involved in the ALMA project all over the world.