Published in the October 2011 issue of NAOJ News (monthly newsletter)

Following the previous article written by Masao Saito, I will continuously feature the ALMA Early Science Operations which started from September 2011. For this initial phase of the ALMA science observation, ALMA adopted 112 observation programs proposed by researchers worldwide (including 27 from East Asia). These programs are currently being carried out in Chile by a joint team made up of members from the scientific verification team and scientific operations team. Along with scientific observations, the joint team is working on the verification tests with the actual antennas and other equipment connected to the observation system. At the Array Operations Site (AOS) at 5000 m asl, more than 16 antennas are connected to the observation system and working for operations (the photo above).

In this article, I will introduce expected outcomes from ALMA observations focusing galaxies beyond our Galaxy. ALMA receives radio waves at millimeter/submillimeter wavelengths from several mm to 0.1 mm. Millimeter/submillimeter waves are emitted from cosmic dust and molecular/atomic gas at extremely low temperatures (below minus 200 degrees Celsius). These types of dust and gas are spotted around active star forming regions in galaxies or are floating between galaxies like slight haze. By observing radio waves emitted from these gas and dust, we can estimate their temperature, density, and quantity. Particularly, radio waves can be a useful tool to get information when observing a dense region of dust and gas where infrared and visible light are blocked out. Radio waves are also emitted from electron accelerated by magnetic field lines and from high-temperature ionized plasma around stars and galactic nuclei. These radio observations enable us to obtain the strength and direction of the magnetic field and the quantities of high energy photon that produces ionized gas. In the following paragraphs, I will give more detailed explanation on what will be explored by ALMA observations.

* Formation of Galaxies
Dating back to the dawn of the universe and discovering when and how the universe began. This is a big dream of all galactic astronomers and it would be no exaggeration to say that this is a final goal not only for radio telescopes but also for all large-scale telescopes. Subaru Telescope is yielding many remarkable results, but it seems that Subaru is yet to unveil the real picture of the galaxy formation. ALMA will make a big breakthrough in this challenge. ALMA has the capability to capture with unprecedentedly high sensitivity the birth of a galaxy where a huge number of stars were generated from a large gas clump within a very short period of time and began to shine at submillimeter wavelengths while warming molecular gas around them. ALMA is expected to witness the birth of a galaxy in close coordination with Subaru.

* Evolution of Galaxies
Recent studies show that there are variations among galaxies in events that take place in their lives. One of the most dynamic events among them is the collision and merger of galaxies. It was once supposed that the collision and merger of galaxies were very rare phenomena in the universe, but recent observation results show that these spectacular phenomena might have occurred frequently in the early stage of the universe. However, we are yet to find out what impact the collision and merger have toward the evolution process of galaxies; more specifically, the number of stars formed as a result of the merger and their forming regions, the consumption mechanism of interstellar gas in the galaxies, and the presence of massive black hole, etc. With ALMA, we may be able to foresee the future of merged galaxies by studying their gas distribution and kinematics. In fact, the latest observation data for scientific verification revealed the detailed kinematics of molecular gas in two merging galaxies NGC4038 and NGC4039, collectively called “Antennae Galaxies” (the image below). 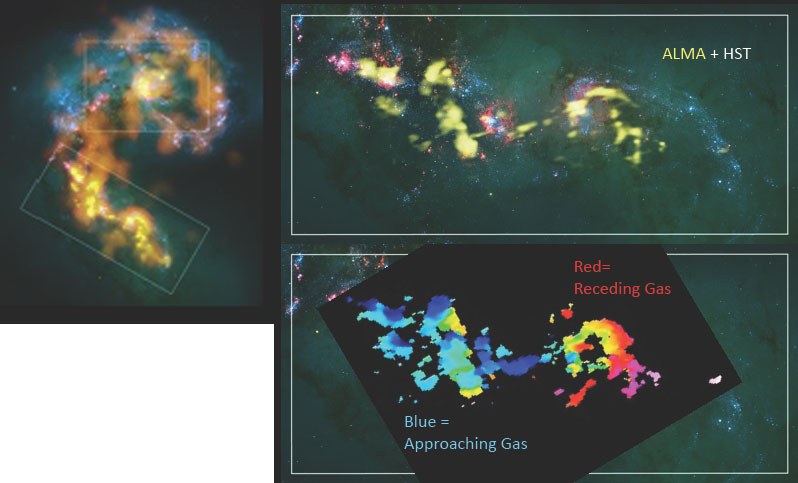 * Conclusion
ALMA Early Scientific Operation has finally started. The first phase of the ALMA early science observation will continue until the end of 2012 and the call for proposals for the next phase is scheduled for May 2012. In the next phase, ALMA will show up with an increased number of antennas and improved capabilities.