Published in the March 2011 issue of NAOJ News (monthly newsletter)

● Development of Antenna Control Software
I started working at NAOJ as a contract researcher in charge of antenna control from the spring of 2005. Since my previous work had no relation to astronomy or to any other academic fields, I feel sort of awkward about writing about me here, but I would like to take this opportunity to introduce myself and explain how I came to join the NAOJ ALMA.

After graduating from university, I worked at a manufacture of minicomputers where I was engaged in the production of a real-time UNIX kernel and C compiler. After minicomputers and operating systems (OS) of Japanese manufacturers’ proprietary specifications became obsolete, my work shifted to software development for embedded devices. At one time, a high-speed JAVA VM that I developed was mounted on all cell phone models of NTT Docomo (a major Japanese cell phone company). In the software industry that offers a wide range of works, I have been working in the field close to hardware such as processors and devices.

My first job at NAOJ was to make specifications of a control system between software and antenna, as a computing team member in charge of antenna control. Since there was already a prototype antenna, we didn’t’ have to create all specifications from scratch but still had a lot of detailed matters to decide within a fixed framework agreed among Japan, North America, and Europe. In the ALMA partnership, basic hardware items (driving mechanism, position monitoring system, etc.) are developed according to common specifications agreed by three parties to ensure compatibility between the different types of antennas. So, in principle, we cannot change the specifications or make adjustments by rewriting software even if it turns out a complete product has any discrepancy from the specifications.

In a development work with prototype hardware as in my previous works, we can see or know intuitively whether the software is working well or not by watching the movement of the hardware along with the commands of the software. On the other hand, in the case of ALMA, its prototype would be a colossal antenna weighing 100 tons and we have no way to work with it in our laboratory. So, with no prototype at hand, antenna specification documents and simulators are only things that we could rely on. In this situation, we only finished a connection test with the Antenna Control Unit (ACU) and no antenna control test with an actual antenna was performed before the antenna shipment. The first driving test with the actual antenna was carried out in September 2007 at the Site Erection Facility (SEF) within the ALMA Operations Support Facility (OSF) at 2900 m asl in Chile.

At the SEF, we started the preparation for the first driving test from nothing; cabling of electrical and network lines, assembly of computing systems, and installation of operating system (OS) and control software, etc. In these works, I was helped a great deal by my colleagues of the NAOJ computing and antenna teams. For six months before going to Chile, I had stomachaches every day from anxieties about the conditions in Chile, arrangement of necessary testing instruments/control software/tools, preparation readiness, and other unpredictable factors related to the first antenna driving, but after arriving at the ALMA site in Chile I could calm myself down and finished what I should do one by one. I was very excited and gratified when I first saw the antenna moving accurately in accordance with the commands from the control software that we developed. 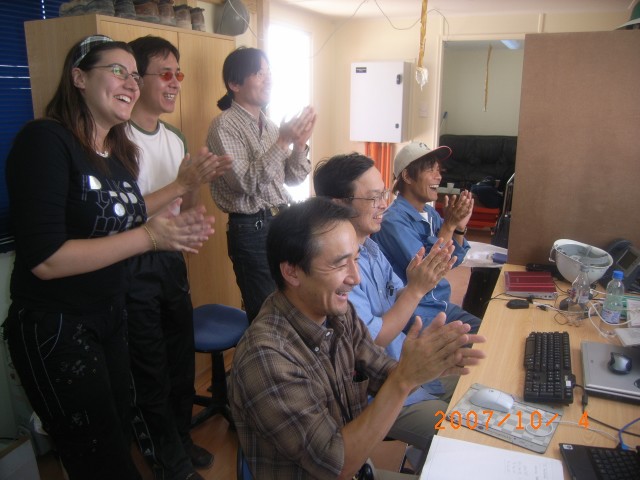 Picture: The antenna was successfully driven at the first attempt at the Operations Support Facility (OSF)

● Integration Test of ALMA Software
I have been working for the ALMA computing since April 2009. I am a member of the ITS (Integration Test and Support) team, which takes up 50 % (actually 70 or 80 %) of my work time. One of the major tasks of the ITS team is to carry out the integration test for the ALMA software. The Japanese ITS team undertakes the implementation of the end-to-end test (simulated observation) with the ACA correlator developed by Japan. Last year we spent a lot of time checking operation of the ACA correlator using a replica in Mitaka and an actual ACA correlator at the ALMA Array Operations Site (AOS) at 5000 m, although we usually use simulators both for the correlator and the antenna. The operation test with the actual correlator was done remotely via a computer network connecting Mitaka and AOS. In this kind of remote testing, we have to wait a moment after entering a command to receive a response from the opposite side of the earth, but we got used to it and became able to wait with no haste. However, in a remote test using actual equipment, we have no way to solve the problem from Japan when a hardware failure occurs, and only thing we can do is to wait anxiously until on-site work is done.

At the end of last fall, we carried out an on-site test with an actual antenna as part of ITS activities. The test was conducted at the ALMA Operations Support Facility (OSF) at 2900 m asl in cooperation with the computing team of the Joint ALMA Office (JAO). Unlike a simulation test, the operation test using an antenna equipped with real hardware devices was really exciting and enjoyable. But, on the other hand, we had some problems with real hardware. Our scheduled tests were sometimes interrupted by hardware failures and we needed support from the JAO staff in handling unfamiliar hardware. Moreover, since there is no other Japanese staff or translator at my workplace in Chile, I didn’t get what my colleagues were talking and felt kind of miserable. I am fairly accustomed to written English thanks to daily email communication within the ITS team, but I really felt that I should practice English conversation.

Currently, we are testing “ALMA8” an updated version of the software. We started a test with a replica in Mitaka from the end of January 2011, and will start a test with the actual ACA correlator located at the AOS soon. The ITS team holds regular weekly meetings where we report the progress to our team leader at the ESO and get advice from him on technical issues that we are working on. It has been almost two years since I started to work with him, but we’ve never met and do not even know each other’s face.