14. Backstage of the ALMA Project

Published in the July 2011 issue of NAOJ News (monthly newsletter)

● Story about money
Do you know the total budget of the ALMA construction? Like other large-scale international projects, ALMA costs a lot of money, which is estimated at over 100 billion yen! Japan shares about 25.6 billion yen of the total budget for the development and manufacture of antennas and other related components. In addition to this, Japan contributes 25% of the labor cost for the ALMA operations & testing as well as a part of operation costs of the Joint ALMA Observatory (JAO), accommodations, and cafeteria at the Operations Support Facility (OSF) at 2900 m asl according to the agreed share of contribution. These payments are specified in the agreements concluded among the Associated Universities Inc. (AUI), the European Southern Observatory (ESO), and the National Astronomical Observatory of Japan (NAOJ) on behalf of North America, Europe, and East Asia, respectively.

The shares of contribution are paid in response to the bills issued by AUI and ESO. The payments are processed at the NAOJ Mitaka headquarters and NAOJ Chile Office in Santiago. Currently, the NAOJ Chile Office has three administrative staff members from Japan to deal with the payments and other office works. One of the Japanese staff members recently transferred from Japan can speak Spanish and English fluently, and she is expected to play an important role as a communicator.

● Chile, on the other side of the world
A major concern in making payments is the distance between Mitaka and Santiago. Chile is located on the other side of the world from Japan, and there is a time difference of 13 hours between the two countries. This means when it is daytime in Japan, it is nighttime in Chile. Now we have e-mail and our communications became much easier than the past, but we still have to wait for answers from overseas partners sometimes anxiously. The language is another concern. In ALMA, we use English as a common language, but it is a second language for most of the project members. I pay careful attention especially when dealing with important matters, but sometimes my intention cannot be conveyed accurately. Recently I began thinking this might not be just a language problem and direct communication may solve these problems easily. For me, Japan and Chile are still far way. 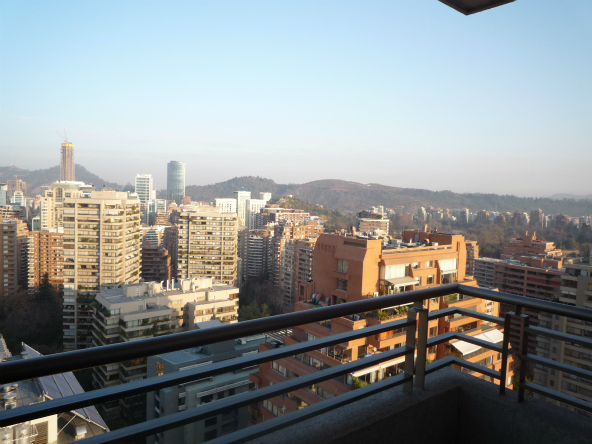 Santiago City viewed from the hotel where I stayed. There are many skyscraper buildings surrounded by magnificent mountains. As Chile has many earthquakes (same as Japan), buildings reportedly have earthquake-proof structures.

● Supported by many people
My job is mainly to assist the payment procedures explained above and to check and translate agreements. When dealing with invoices sent from AUI and ESO in a businesslike manner, I often only see the amount of payment and the persons in charge, and forget the fact not written on the invoice that many people are engaged in the work. At such times, I remember my first business trip to Chile three years ago. I went there to attend an accounting meeting in Santiago. Although I had never expected that I could visit there on business because I am neither an astronomer nor an engineer, I was given an opportunity to visit the JAO Santiago Central Office (SCO) and the ALMA Operations Support Facility (OSF) to get to know my counterparts in Chile before starting my work as a project coordinator.

After the one-week meeting in Santiago, I went to the OSF. I saw many people staying at a big contractors’ camp and working for the construction of ALMA in a harsh environment in the Atacama Desert. I saw contractors digging and driving stakes into ground at the construction site. It was the first time I realized that ALMA is completed through strenuous efforts of many people. This was a very impressive and refreshing experience for me who was only doing paper works in Japan. After this, I try to always keep in mind that the project is supported not only by executive staff of Japan, North America, and Europe, but also by many others including those working at the construction site and at the OSF cafeteria, and those doing maintenance work at the JAO. 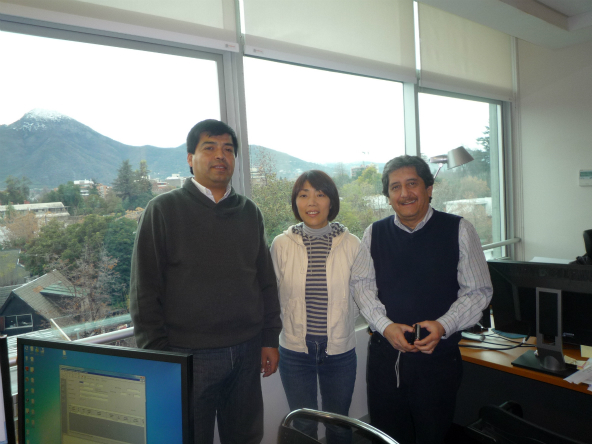 In July 2011, I made my second visit to Chile to arrange payments with AUI accountants Mr. Pedro Delgado (left) and Mr. Luis Dominguez (right). We could expedite payment procedures by meeting face to face.

● Though I do not know much about astronomy
I am doing background work as a member of NAOJ ALMA. Before I started work here, I had no relation to astronomy or any academic fields. Since I am working at NAOJ, people sometimes ask me questions about stars and the moon, but I am completely “astronomy illiterate” and cannot answer these questions. In fact, it was a quirk of fate that brought me to this job. Although it would take time for me to become “astronomy literate”, I will do my best and fulfill my part in the ALMA project.