Published in the September 2010 issue of NAOJ News (monthly newsletter)

In late June 2010, the two types of Japanese receivers successfully received the first spectrum from the universe at the ALMA Operations Support Facility (OSF) at 2900 m asl The first spectrum was received by the Band 4 and Band 8 receivers on June 22 and June 30 respectively.

● Band 4/8 Receivers Developed by Japan
ALMA (Atacama Large Millimeter/submillimeter Array) is a global partnership of East Asia, Europe, and North America in cooperation with the Republic of Chile. ALMA is now under construction in the Atacama Desert in northern Chile, and its full operation is scheduled to start from Japanese fiscal year 2012. When completed, ALMA will be the world’s most advanced radio telescope consisting of more than 66 antennas.

ALMA will observe unexplored regions of the universe at frequencies from 30 GHz to 950 GHz. To receive such a wide range of frequency, the ALMA antenna has 10 types of receiver cartridges covering the frequency bands from Band 1 to Band 10. These 10 receiver cartridges are developed and manufactured by ALMA partner institutions all over the world, among which the National Astronomical Observatory of Japan (NAOJ) assumes the development of three bands: Band 4 (125 to 163 GHz), Band 8 (385 to 500 GHz), and Band 10 (787 to 950 GHz). The ALMA Band 4 and Band 8 cartridges are equipped with the waveguide superconducting sideband-separating (2SB) mixer with the waveguide orthomode transducer (OMT) and SIS junction, which allows orthogonal dual-polarization observation as well as USB/LSB simultaneous observation.

Some subcomponents such as cooling system, optical system, and LO system for the ALMA receiver are being developed in collaboration with the European and North American partner institutions such as the Rutherford Appleton Laboratory (RAL/UK), the Institut de Radio Astronomie Millimetrique (IRAM/France), and the National Radio Astronomy Observatory (NRAO/US). Since ALMA will be operated at the high site in the Andes over 30 years, the subsystem components are designed to have no mechanical adjustment system for easy maintenance. To meet the strict requirements of ALMA, many state-of-the-art technologies and various new devices are integrated into the thermal/mechanical design of the receiver (Figure 1). 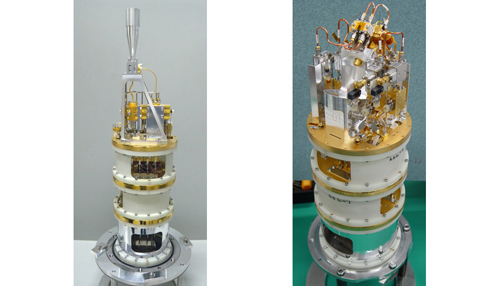 ● Working as Deputy AIV Science Team Leader
From Jun 22 through 25, 2009, the Critical Design Review (CDR) for the Band 4/8 Receiver Cartridges was held at the NAOJ Mitaka Campus. As a result of the review, the designs of the two cartridges were approved by the review committee including specialists (Figure 2). Several months after the review, the first Band 4/8 receiver cartridges were shipped from the NAOJ Advanced Technology Center to the North American Front-End Integration Center at the NRAO in the U.S., and they were combined with other cartridges and installed in the cooling system (cryostat) developed by the RAL. After the evaluation tests at the NRAO, the integrated receivers were delivered to Chile. 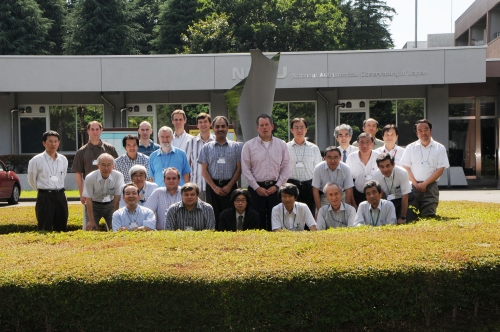 Figure 2: Participants of the Band 4 CDR. The author is the third from left in the front row.

After having been engaged in the development of the Band 4 receiver cartridge as the Band 4 team leader for five years, I started to work as an international staff member (ISM) at the Joint ALMA Office (JAO) in Santiago from August 2009.

At the JAO, I am engaged in the antenna evaluation and commissioning as the deputy AIV (Assembly, Integration and Verification) science team leader. The AIV team is responsible for assembling and testing the subsystem components, which are manufactured in various parts of the world, and integrating them into the ALMA telescope at the OSF. Among these activities, the AIV Science Team is in charge of the measurement/evaluation of the antenna surface accuracy and pointing accuracy, as well as the performance check of the ALMA antenna as a single radio telescope after the receiver system is installed (e.g. checking the pointing accuracy using actual celestial objects, and checking the beam shape and spectrum received by each band), and interferometer tests using two antennas for performance verification. The antennas which have passed the evaluation tests by the AIV team will be transported to the ALMA Array Operations Site (AOS) at 5000 m asl where another evaluation will be conducted by the CSV (Commissioning and Science Verification) team.

At present, I am working on “8-6 shift,” which means I attend work for eight consecutive days for antenna evaluation at the OSF, and take six consecutive days off in Santiago. In the AIV team, most of the rotating shift works are turned over to the next duty team on Wednesday.

Since I had never worked before in an international team with people from various countries, initially I had a difficult time coping with different language, customs, and cultures. But after a year, I got used to the shift-work in Chile and could enjoy my work and days off by making the most of my 8-6 shift. Recently, I traveled to Patagonia taking advantage of my six consecutive days off (Figure 3). 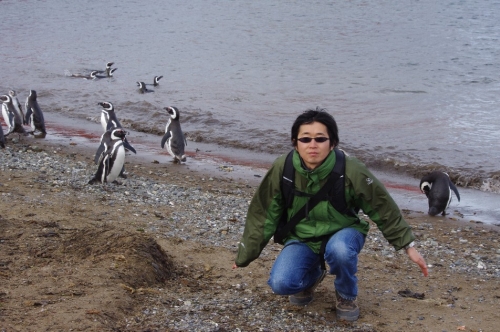 Figure 3: The author and penguins in the Magdalena Island Penguin Colony

● First Spectrum Received by Band 4 and Band 8 !
Let’s get back to the Band 4/8. The receiver system equipped with the Band 4 and Band 8 cartridges was installed in the seventh North American antenna. Around the date of the installation, my shift rotation was unexpectedly changed from Wednesday to Monday (June 21). I was very excited to see the schedule, because the reception of the first spectrum with the Band 4 receiver was scheduled on that day. I hurriedly called to my coworker at the OSF and confirmed that they had already finished the measurement of the basic items such as the pointing accuracy and subreflector position, and the antenna was ready for the first spectrum. As soon as I hung up the phone, I went to the town to buy a shirt with the number “4” on it. I thought I would easily get a football jersey of the Chilean national team because it was during the World Cup, but it was very difficult to find one (although I could find many other uniform numbers of Chilean star players.) I searched all over the shops, and finally got one with the number 4. Expecting to witness the first spectrum with the Band 4 receiver that I developed, I put on the shirt and flew to the OSF.

Although it took us a little time to adjust the pointing and the subreflector position due to unexpected software failures, we could successfully receive the spectrum of the SiO maser (v=1, J=3-2) at 129 GHz from W Hya and CS emission line (v=0, J=3-2) at 147 GHz from the galactic center (Figure 4 and 5) on the first day of the observation. For me, this was a really impressive moment because the first spectrum was received as expected on June 22, 2010, exactly one year after the CDR. 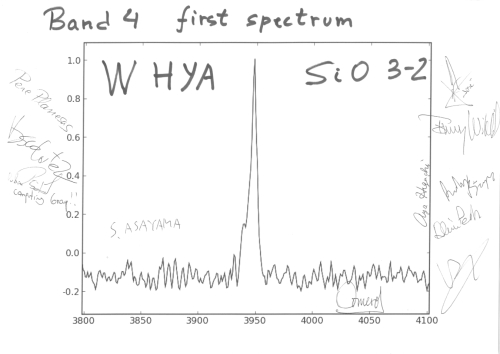 Figure 4: The first spectrum of W Hya received by the Band 4 receiver on June 22. 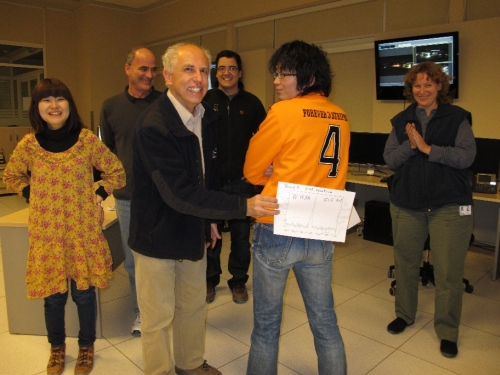 Figure 5: ALMA staff celebrating the Band 4 first spectrum. The author is the one wearing an orange T-shirts with the number 4. The man showing the spectral graph is an AIV team member Pere Planesas (AIV scientist).

Following this successful observation, we tried to receive the first spectrum with the Band 8 receiver too, but we couldn’t make it because the state of the atmosphere was unfavorable during my stay at the OSF. However, on Jun 30, two days after I left the OSF, team member Paulo Cortes (AIV Scientist) succeeded in receiving the first spectrum with the Band 8 receiver (Figure 6 and Figure 7). 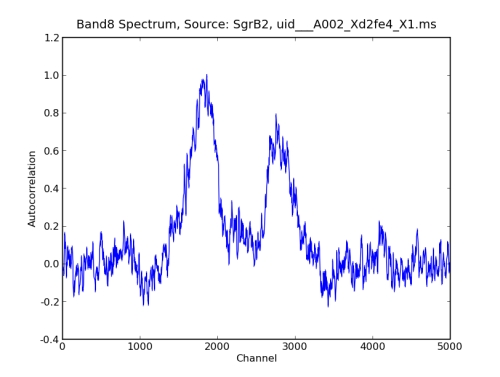 Figure 6: The first spectrum of SgrB2 received by the Band 8 receiver on June 30 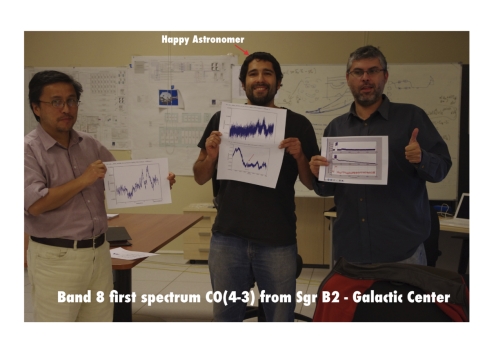 The Band 4 and Band 8 receiver cartridges are being developed and manufactured at the NAOJ Advanced Technology Center in Mitaka. Currently, we are manufacturing the second and third receivers toward the production phase. The ALMA receiver will achieve the single-sideband (SSB) receiver noise temperature equivalent to five to nine times the quantum limit in two orthogonal polarizations. With the combination of this receiver technology, high-precision antennas and favorable observing conditions of the Atacama Desert, ALMA is expected to achieve unprecedented resolution and sensitivity and make great contributions to the advancement of astronomy in various fields.

We appreciate your continuing support for the ALMA project.