Published in the November 2010 issue of NAOJ News (monthly newsletter)

We are developing and manufacturing Band 4 (B4) and Band 8 (B8) receivers for ALMA in a team of 18 members. 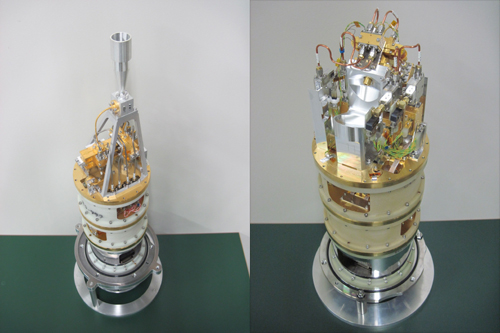 ALMA requires high-sensitivity receiver system to detect very weak radio signals from the universe. The B4/B8 receivers are cartridge-type superconducting heterodyne receivers with two sideband-separating (2SB) mixers using the waveguide ortho-mode transducer (OMT) and the superconducting tunnel junction (STJ), also known as a superconductor-insulator-superconductor tunnel junction (SIS), which allows 4-channel simultaneous observation of two orthogonal polarizations, upper sideband (USB), and lower sideband (LSB). To receive weak radio signals at high sensitivity, the SIS mixer is placed in a vacuum case and cooled to 4 degrees Kelvin (-269 degrees Celsius) with a cooling device called “cryostat”. While the SIS mixer for the B4/B8 receivers is manufactured by the SIS team at the NAOJ Advanced Technology Center (ATC), other receiver components are manufactured by the ATC Mechanical Engineering (ME) shop team including the surface accuracy measurement of the optical system with a three-dimensional measurement device.

The first B4/B8 receivers have already been in use for observations. As reported in the August issue of

Bienvenido a ALMA! [4] , the B4/B8 receivers successfully received the first spectrum in June 2010. We were all encouraged by hearing that our delivered receivers were working properly at the ALMA site in Chile.

Before shipment, receivers undergo a comprehensive test (called Preliminary Acceptance In-house or PAI) including electrical/mechanical performance tests. Noise temperature is one of the most important parameters that affect the sensitivity of the receiver. The measurement results of B4/B8 noise temperature indicate that B4/B8 receivers satisfy the ALMA cartridge specifications shown in Table 1, and what is more, they have achieved the world’s highest receiver performance at respective frequency ranges. The requirements for ALMA receivers are all technically challenging but stimulate our motivation. Figure 2 shows a Band 8 receiver (No.4) during a vibration test for mechanical evaluation. For the test, the receiver is fixed on the vibrator table and vibrated to the horizontal direction (X and Y) and to the vertical direction (Z). I feel sorry for having to apply thumping vibration to our precious receiver even for testing. 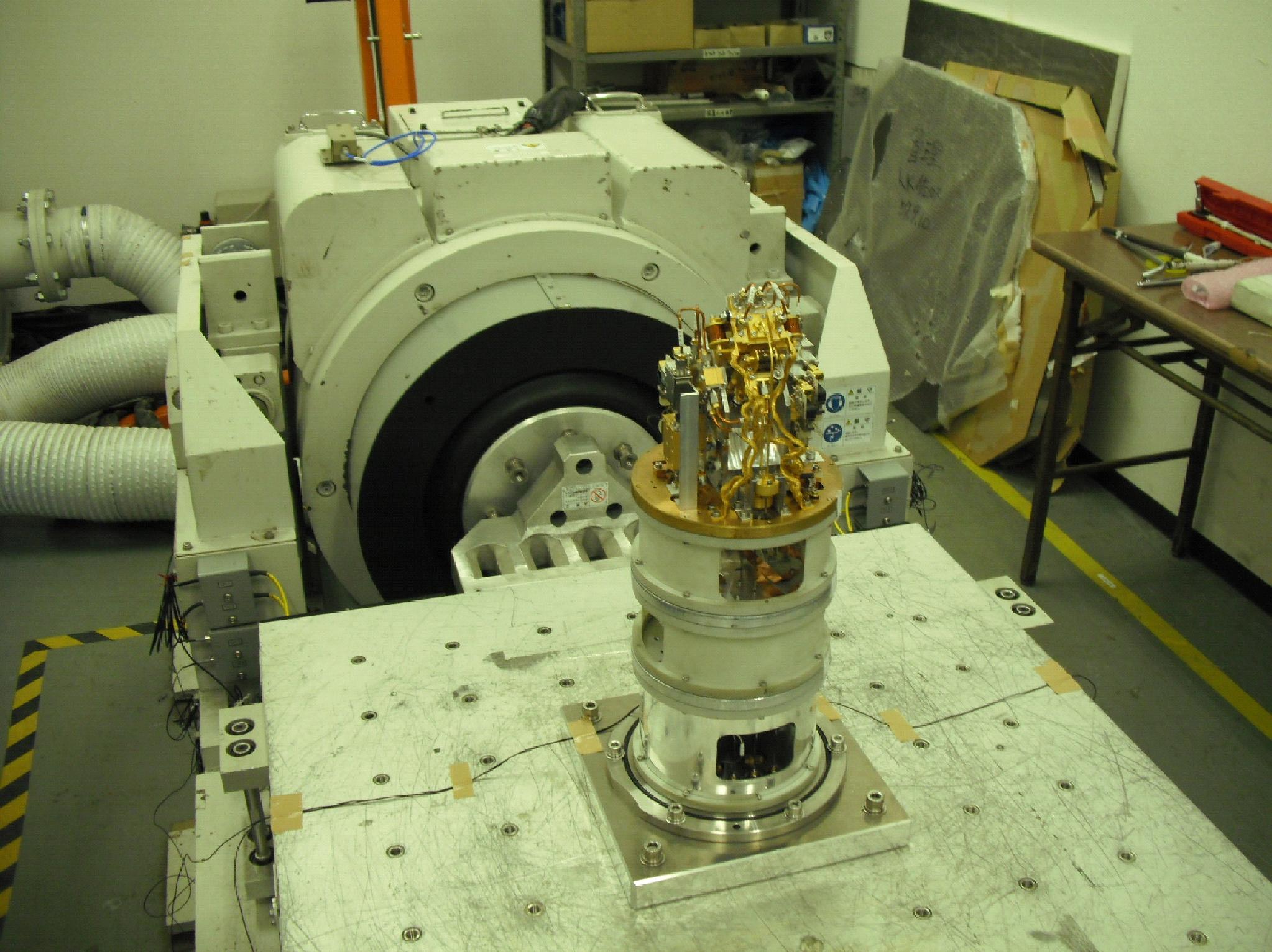 The receiver is shipped in a special container as shown in Figure 3, for protection from damage during transport. We place the receiver in a metal cylinder called “transport tube” and pack it in a special container for transport called “pelican case” which has waterproof/dustproof property and high durability enough to be used for military purposes. The shock log attached to the transport tube monitors the shocks given to the receiver during transport.We used this container for the first time for exporting the first B4/B8 receivers to the North American Front End Integration Center (FEIC) and could deliver them to the destination without any damage. 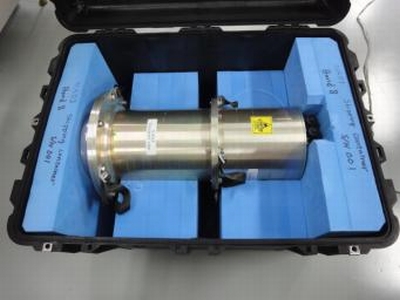 Figure 3: Container for transport. The receiver is placed in the transport tube which is protected by blue shock absorbing material. The container is packed with cushioning material in a box made of heavy duty corrugated cardboard called “Tri-Wall”. This container passed the falling test at NAOJ.

There are many other activities associated with the production of receivers, ranging from procurement of parts in Japan and overseas to export of assembled receivers. We seek competing bids for the procurement of parts, and the purchase is made on a yearly basis with the support from the NAOJ procurement section. We also purchase imported parts/components which are developed and manufactured by European and North American ALMA partners. These imported components are integrated into the receiver at the NAOJ Advanced Technology Center (ATC) in Mitaka, and exported to regional ALMA FEICs in Europe, North America, and in Taiwan. When we export products with imported parts, duty exemption for re-export is applied upon customs clearance. We first apply for export permit and then make customs declaration according to the Japanese prior comprehensive inspection system, since the receiver and its warm cartridge assembly are subject to the control prescribed by the Japanese Import Trade Control Order. We are making preparations/ applications for export permit with strong support from international scientific affairs section at NAOJ.

At present (as of November 2010), we are making arrangements for the shipment of three receivers No.2, 3, and 4. In the current plan, we will manufacture 73 receivers for each band. Volume manufacturing of a single product is nothing unusual for companies in the manufacturing industry but it is the first attempt for NAOJ. So, I need to build effective and efficient manufacturing method and tracking system to ensure traceability of products, utilizing my knowledge of safety, reliability, and quality controls, obtained from my past experience in the development of satellites.

Finally, I would like to take this opportunity to thank the NAOJ ALMA staff, ATC staff, and NAOJ administrative staff, and our partner manufactures for their strong support and cooperation for our manufacturing activities.