Published in the February 2012 issue of NAOJ News (monthly newsletter)

* Solar Observation with ALMA !?
"Will you observe the sun with ALMA!? Doesn’t the antenna catch fire?" I was asked this question by many people while planning the solar observation with ALMA. I understand their concern, because I myself was initially surprised by the idea and my first reaction was "Are you really serious!?"

I heard the solar observation with ALMA had been envisaged from the initial stage of the project especially by the effort of the late Mukul R. Kundu, who frequently had visited the Nobeyama Radio Observatory (NRO) as a professor at the University of Maryland. It is easy to imagine that ALMA has come a long way to realize the ALMA solar observation, increasing the burden on the antenna development team members of Japan, Europe, and North America who strived to make the antenna capable of submillimeter observation with extremely high surface accuracy while allowing the use of the high-precision antenna for solar observations. We, researchers who are given a rare opportunity to observe the sun with ALMA, should express our gratitude to the antenna teams and the antennas providing us valuable solar observation data without a fire.

* The closer, the more difficult?
Needless to say, the sun is the closest star to the Earth. Due to its closeness, we receive tremendous amount of electromagnetic waves from the sun, which is incomparably greater than other astronomical objects. For this reason, solar astronomers are envied by researchers of other fields, but we also have difficulties for its closeness. For example, the sun emits enormous amount of millimeter/submillimeter waves as well as visible light and infrared rays that produce a rise of the antenna temperature mentioned above. Although the ALMA antenna is designed to receive faint radio waves on a scale of milli Jy(*) or micro Jy, the radio waves emitted from the sun during the flare reaches several tens of thousands Jy, which exceeds the linear domain of the receiver sensitivity. To prevent this, we use an attenuation filter, in other words, a sunglass for ALMA, and make some data correction to compensate the effect of the filter. To obtain this correction value, we are currently conducting test observations with prototype filters and making data analysis.

The closeness of the sun also gives a significant impact on the image synthesis of the interferometer observations. In the interferometry, an image of the object is produced by synthesizing signals received by multiple antennas by computer processing. The field of view of the interferometer depends on the directivity of the antenna. In case of an ALMA observation at 100 GHz, it will be a circle of 60 arcsec in diameter. Figure 1 shows a giant flare with a circle of 60 arcsec. As you can see, the ALMA field of view has only the size of a sunspot, very small relative to the entire size of the sun. Producing images of this kind of extended structures is not an easy task for an interferometer and it is required to develop a special image synthesis technique. The solution for this will be ACA (Atacama Compact Array), which was developed by Japan and has a strong capability in image synthesis of extended sources like the sun. We hope to demonstrate the power of the small ACA by capturing amazing solar images with ALMA. 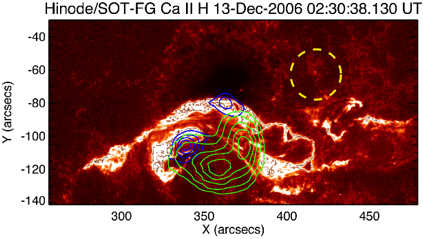 * Alma del Sol
"Alma del Sol"= "soul of the sun (solar physics)" will be reached by understanding the physics of the sun, the closest star to the earth and making a common prototype of a wide range of astrophysical phenomena. The ALMA spatial resolution of 0.1 arcsec or less cannot be achieved by any solar telescope to be constructed over the next 10 years. With this high capability, ALMA will surely further promote understanding of particle acceleration during flare, which has been studied using radio data on a scale of 10 arcsec.

Along with this enhancement of existing knowledge, ALMA will also pioneer a new field of study: the study of solar chromosphere at millimeter/submillimeter wavelengths. The observation results with Hinode Satellite revealed that the solar chromosphere is more active than expected, showing the importance of understanding the cromospheric heating in relation to the chromosphere activity from a physical point of view. Since most of the millimeter/submillimeter waves from the sun are thermal emission from the lower part of the chromosphere, we will be able to explore the solar chromosphere with unprecedentedly high spatial resolution of ALMA. Furthermore, it is expected that ALMA solar observation results will have huge impact on the study of particle acceleration and plasma heating which are taking place all over the universe.

Finally, I would like to extend my deepest appreciation for Professor Kundu who passed away in 2010 for his effort in our research collaboration using the data obtained by YOHKOH satellite and Nobeyama Radioheliograph. As luck would have it, I was given the opportunity to take part in the ALMA solar observations. I hope to reward the efforts of our forerunners by committing myself to the success of ALMA solar observations. 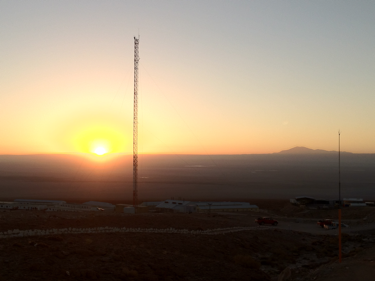 Figure 2: Sunset over the Atacama Desert viewed from the OSF