11. Making Unprecedented Telescope with People around the World

Published in the April 2011 issue of NAOJ News (monthly newsletter)

Recently, ALMA has announced its first Call for Proposal for the early science operations. I heard that the first international meeting toward the realization of ALMA was held 28 years ago. It was the time when future ALMA-generation astronomers (current post graduate students) had not yet even been born. This long-wished ALMA telescope is about to complete beyond generations.

ALMA is described as “unprecedented” for its revolutionary capability. Another “unprecedented” aspect for the Japanese astronomy is participating in a global partnership project where people of different nationalities, cultures, languages, and scientific backgrounds are working together. I enjoy this “cultural exchange” that I had never experienced before in my previous works in Japan. However, working with people of various backgrounds is not always easy, and some people may feel it difficult to live in a foreign country. So, it may not be recommended to everyone to work on an international project, but globalization will continuously spread further to various fields including astronomy. For me, being engaged in Commissioning and Scientific Verification (CSV) activities as a member of this big project is something very special and exciting.

One of the difficulties in working in this environment would be, of course, the language. We use English as an official language of ALMA, but people from various countries speak English with accents of their mother tongue. In a discussion, I hear a variety of English with Spanish accent, French accent, Italian accent, German accent, British and American accents, and speak with a Japanese accent. Another difficulty in conversation is frequently-used astronomical jargons and abbreviations. For example, I ask my colleague, “How was the observation last night ?” His answer would be, “I tried to input SB for the WVR test, but the OMC detected an ACD error of PM02, resulting in FSR (*).” At first, I didn’t understand what they were saying at all, but now I got used to these terminology in daily conversation.

While working on site, I have surprising encounters. Sometimes I have a reunion with someone whom I worked with at other observation sites, and other times I have a chance to work with a grand old man of astronomy for measurements through the night. One day, I heard a new comer saying “this is a nice place!” in the midst of the Atacama Desert. I asked him where he was before ALMA and his answer was “I spent a winter at the South Pole”. After experiencing these, I have come to wonder if the world is really a big place or not. 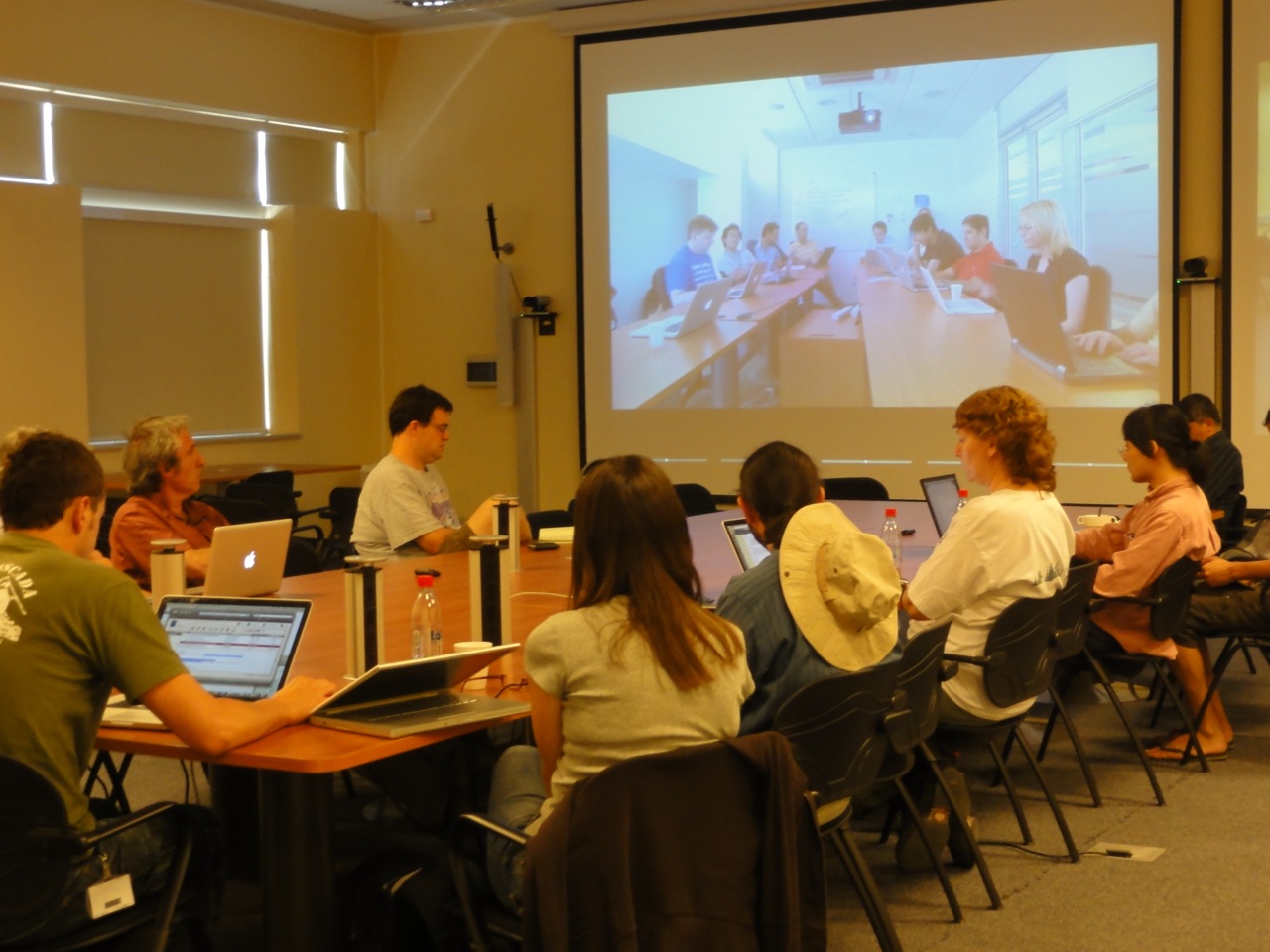 We have daily teleconference meeting with the members of the Joint ALMA Office (JAO) in Santiago, It is like a strategy meeting of a multinational force.

Another striking encounter occurred to me in 2008, when I was given the opportunity to make a presentation at a seminar held at the Harvard-Smithsonian Center for Astrophysics (CfA). After finishing my presentation, I was asked by my host, Lori Allen if I had something I wanted to see there. “I want to see Mini,” I answered. “Mini” is not a name of a car model (although I owned a Mini at the time, and coincidentally Allen too), but a nickname of a 1.2- m radio telescope that mapped the entire Galaxy in CO for the first time. When I was a graduate student working with the NANTEN telescope at Nagoya University, we were regarding “Mini” as a good rival of our telescope and its observation results as a benchmark. I was guided to Mini by Dr. Tom Dame who created the first complete map of the Galaxy in CO. “At last!” I cried at first sight of Mini. Dr. Dame said remembering the time, “I was doing observations while placing a transparent sheet over the IRAS (Infrared Rays Astronomical Satellite) map and filling up spaces with my observation results.” This comment was a surprise to me, because it was exactly the same way as what we did with the observation results of Mini. This visit to CfA made me remember the feeling I had when I started to study astronomy. After a few years, I had another surprising contact. I was introduced to a guest astronomer from Australia by Norikazu Mizuno (NAOJ ALMA) when I was working on CSV activities at the OSF. He explained to me that he worked on the AST/RO project at the South Pole and mapped CO 4-3 emission in the Lupus molecular cloud over my observation results! I was very surprised, but at the same time, very pleased to hear that.

Science is continuously improving. A new discovery is brought about by new observation results based on preceding achievements. ALMA will give us a totally new vision of the universe with its amazing observation results. Someday the results of ALMA would also be overcome by a new one. I hope that my observation results in the upcoming ALMA Science Operations could be the basis for future researches. We will soon start “unprecedented” observations that are realized through efforts of many people beyond generations and geographical boundaries ! 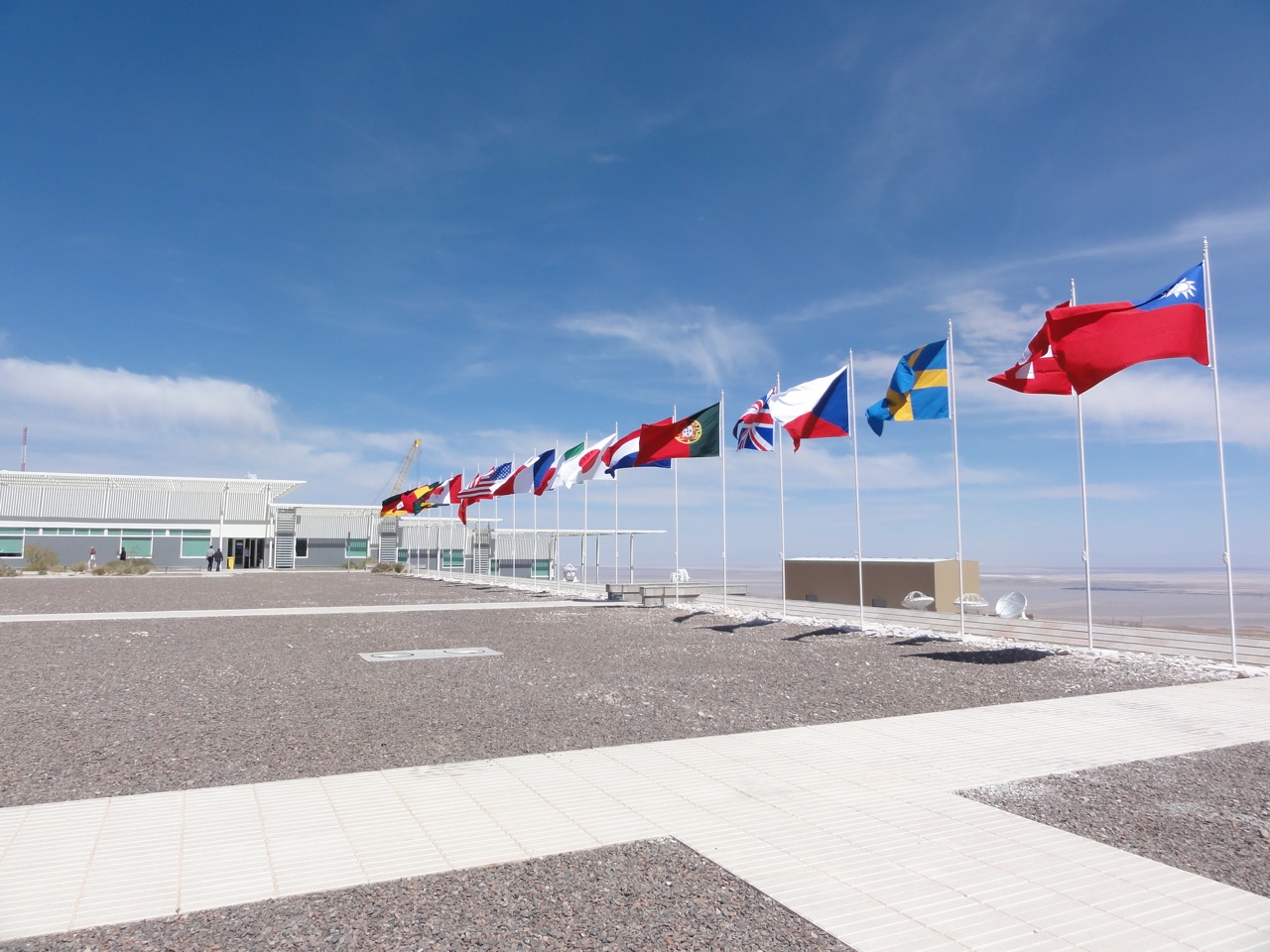 Flags of ALMA Partnership were flown during an ALMA Board meeting, If you notice there is a new flag among others, you are right. Last December, Brazil became a new member of the “European” Southern Observatory (NAOJ).

Last but not least, I would like to thank my friends for their warmest expressions of sympathy upon the Great East Japan Earthquake in March 2011. I received encouraging messages from many people including Chileans who experienced a big earthquake in 2010. I really appreciate their support and assistance in this difficult time.