Published in the January 2011 issue of NAOJ News (monthly newsletter)

ALMA consists of two types of antennas: ACA (Atacama Compact Array) developed by East Asia (led by Japan) and 12-m antenna array developed by Europe and North America. Our control software group in the NAOJ computing team is mainly focusing on the software development for the ACA antenna and ACA correlator.

The ACA correlator is composed of four units of correlators to enable simultaneous processing of four baseband pairs. In August 2010, two of the four units passed the preliminary acceptance test and, in November 2010, their acceptance test was conducted before being handed over to the Joint ALMA Office (JAO). In this test, the ACA correlator was linked to the actual antenna and receiver and carried out an observation for the first time. This was not only the first hardware test but also the first software test in an actual operation environment (not in a simulation). Preparations for this test were made for over half a year mainly by Kyoko Nakamura and Kyoko Ashitagawa from April 2010. 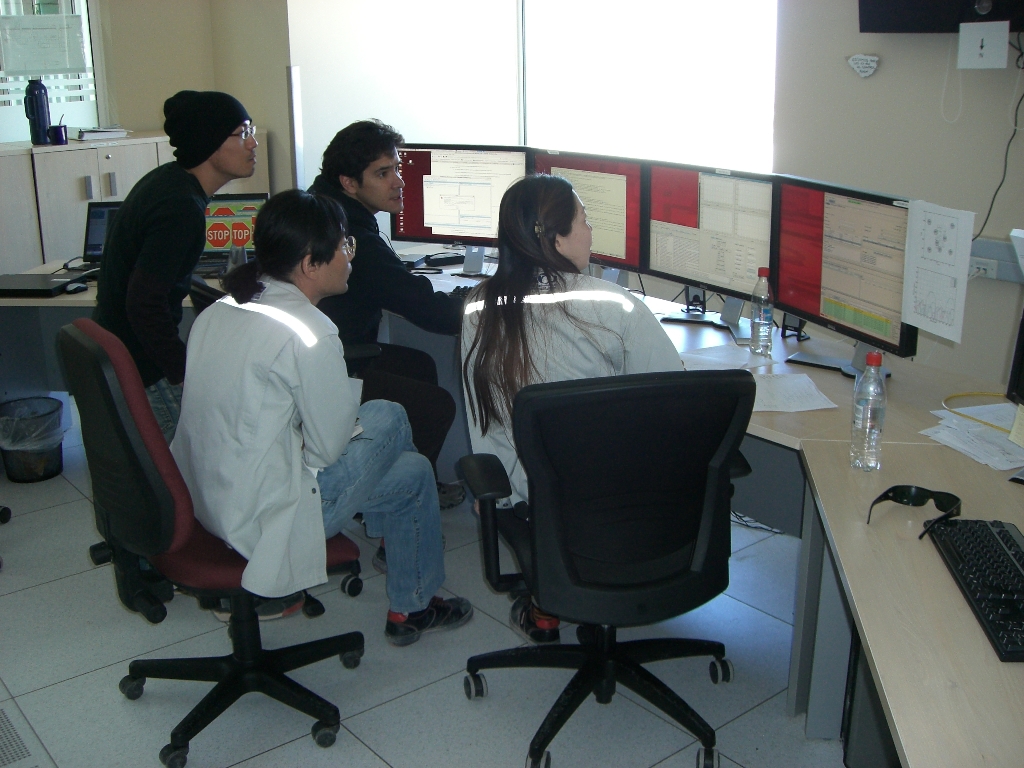 ALMA staff conducting the test in the control room at the OSF
(From left: Kurono, Kamazaki, Victor Gonzalez, and Ashitagawa)

On November 4, we demonstrated an observation with the ACA correlator before the ALMA software engineer staff members including Tzu-Chiang Shen, Ruben Soto, and Victor Gonzalez. The acceptance test was also important to check that the software functions are properly executed via a local network in Chile as we did by remote-operation from Japan. On the next day, we changed the network settings so that we can operate the ACA correlator from the control room at the Operations Support Facility (OSF), added commands for the ACA correlator test to the software and then started the integration test in an operation environment (except the antenna and receiver which were replaced by simulators). On November 6, we started a test observation aiming to obtain the first fringes. Our observation was scheduled from 8:00 to 15:00. First, we checked the antenna driving function and then started the observation from 9:15 according to the test procedures. After much trial and error, we finally detected the first fringes during the final observation on the day starting from 14:15. 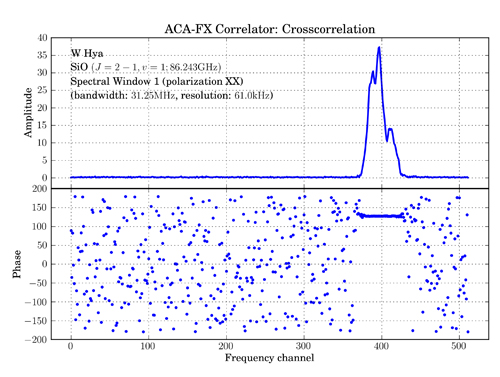 It was highly evaluated by the JAO that we could detect the first fringes on schedule after just 3 days of onsite preparation. However, in this brief observation, we can use only a part of multiple and diverse advanced functions that the ACA correlator has. At present, we are addressing the problems found during the acceptance test while making preparations of software to check the improved functions of the ACA correlator. Although it is not easy to make the ACA correlator software for the early scientific operations, we believe our effort will lead to further development and improvement of the software and the ACA correlator which will be an important part of ALMA.