12. Commissioning ALMA with People around the World NOW

the previous article, ALMA announced its Call for Proposal for the early science operations on March 31, 2011. At the ALMA site in Chile, test observations are being conducted at a rapid pace toward the start of the early science operations. In the previous article, Tachihara introduced Commissioning and Scientific Verification (CSV) activities from a standpoint of an experienced astronomer, and this time I will report the CSV activities from a different viewpoint of a novice researcher Aya Higuchi.

“When you are in the doctoral course, you would be writing papers using ALMA observation data.” These are the words of Professor Tetsuo Hasegawa that I heard when I was a freshman at university. After 9 years, I finished my PhD program in May 2010 (of course, without using ALMA data), and started working at the NAOJ ALMA from April 2010. Soon after assigned to the East-Asian ALMA Regional Center (ARC), I was transferred to Chile and have come to work in this exciting environment as the youngest member of the CSV team at the Joint ALMA Observatory (JAO).

As this was my first visit to Chile and my first experience in living abroad for a long time (I have been in Chile for more than 6 months a year in total), I am just working feverishly without reflecting on things. ALMA Operations Support Facility (OSF) where we conduct ALMA observations is located at an altitude of 2900 meters. In the shift work at the OSF, one person is assigned as the “lead” of the observation regardless of age or experience. I sometimes have to lead a group of astronomers who are 10 years, 20 years or even 30 years older than me. When I took the lead, the team members teased about my awkwardness but I could manage to accomplish the task thanks to their cooperation and support. 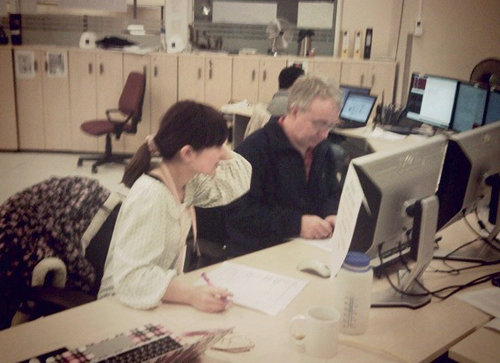 Dr. Rainer Mauersberger and I correcting antenna pad positions. He kindly said to me, “I trust you. Let’s work together.” Honestly I am not so careful about details… 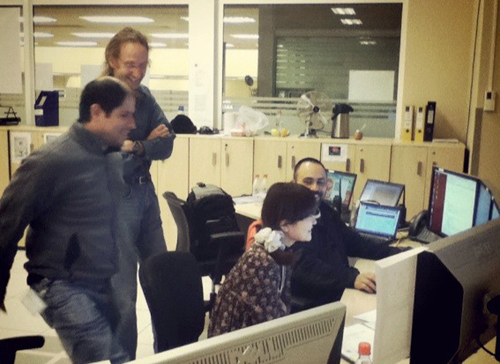 During the observation of TW Hya with Band 9. Band 9 allows the observation at around 600 GHz to 720 GHz, which is the highest frequency range in Cycle 0.
From left: Dr. Juan Cortes; Dr. Bill Dent; and Dr. Jose Cortes. They become very concentrated during observation, while they have fun talking about a Japanese female pop idol group AKB 48 in their free time.

● A picture is worth a thousand words
As a proverb says “a picture is worth a thousand words”, you will understand how we conduct the ALMA observations at the Chilean site once you visit there. During a test observation, we are checking the antenna status and troubleshooting of various problems ranging from fringe detection to antenna control at the same time. In this frenzy of activity, we need to explain our opinions correctly in English to reach consensus on which test observations to be carried out and how to deal with the detected problems. The following is an example of our daily conversation:

(Higuchi): “Today, we will make delay corrections of antenna pad positions and cables to make a newly arrived antenna at the high site (5000m asl) available in today’s observations.”
(Mr.T): “We have fine weather today. So, we should make an observation with Band 9.”
(Higuchi): “It is better to increase the number of available antennas for science verification observations, isn’t it?”
(Mr.T): “Instead of spending 3 or 4 hours for delay corrections, we should make a science verification observation even with 7 antennas.”
(Higuchi): “We have a set of procedures now. It won’t take such long hours.”
-interrupted by (Mr. A): “Can I put my script into today’s observation?”
(Mr.T): “if we miss this chance, we will never have such a favorable weather condition, do you know that? (in a frowning tone)”
(Mr.A) again: “I confirmed with my boss, so can I enter my script now? ”
(Higuchi): “Oh my goodness! Am I in a zoo?”

Of course, they are all experienced astronomers and I have to make convincing explanations to obtain consensus. I haven’t acquired enough skills to perform it well and now I am learning it in practice. Along with this observation work, I am given opportunities to be engaged in scientific discussions and give science talk. Sometimes, I receive valuable feedback from those I respect, and it’s very exciting for me. Furthermore, I also started Facebook that all CSV members are using. As the number of my “Face book friends” increases, more people are getting to know my work. Dr. Al Wooten and Dr.Tommy Wiklind whom I have enormous respect for are also my Facebook friends, and they sometimes press “Like” button on my comments and photos. 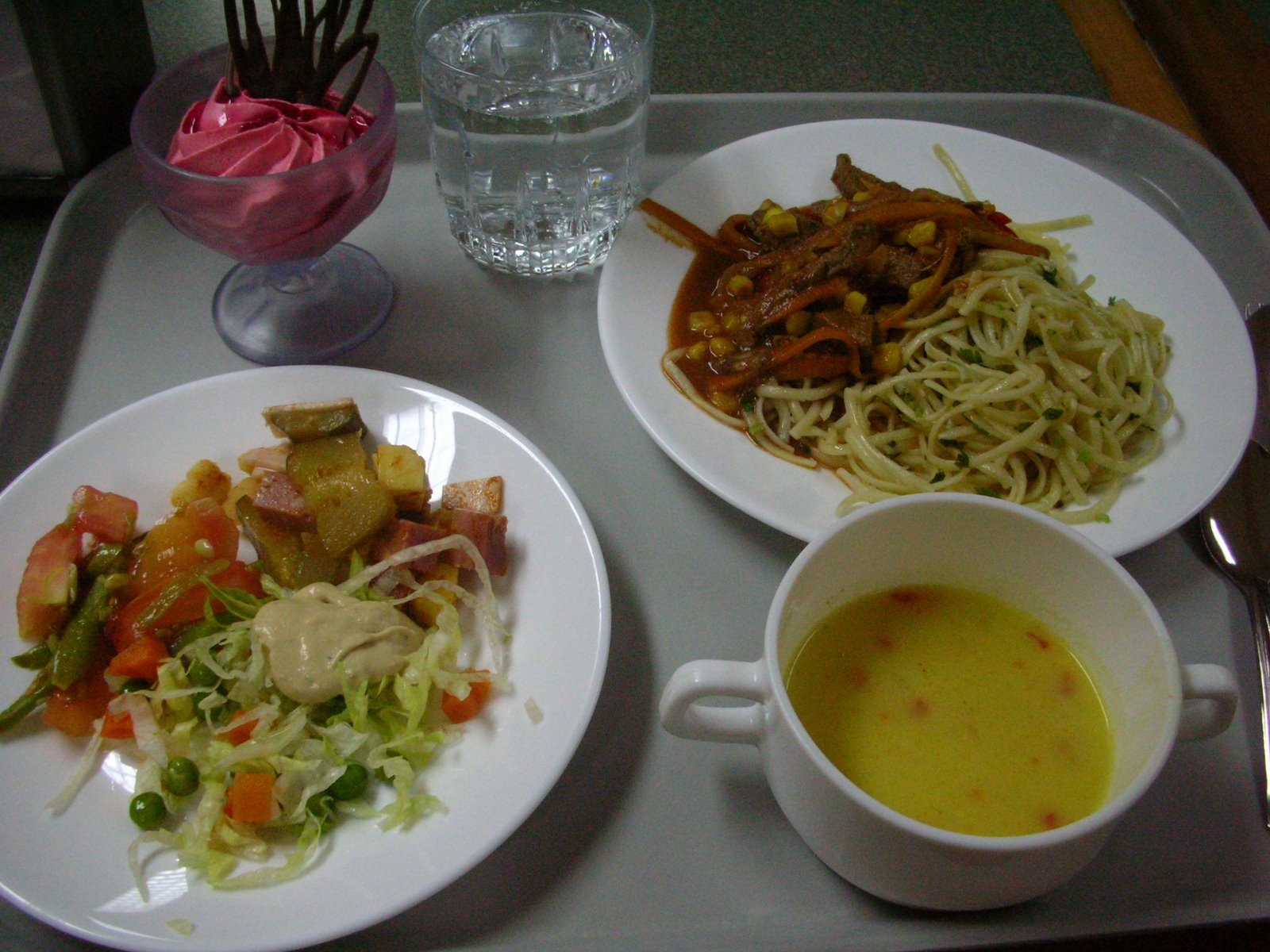 OSF meals may not meet the taste of everyone (especially for the Japanese), but I myself found them delicious. Since I used to have poor dietary habit in Japan (like eating a beef bowl everyday…), I feel very happy here to be able to have a well-balanced diet with vegetables, meat and fish each meal. Especially, soup is good. Give it a try when you visit the OSF. Another favorite food of mine is a Chilean sweet named HAVANNA, which is given on the LAN Chile airplane flying to the OSF. I am almost addicted to this. (Note: Each person has different taste buds.)

● Early Science Cycle 0
We are soon starting the ALMA Early Science cycle 0. It is expected that ALMA will provide many new discoveries and disprove what we have learnt from astronomy textbooks. ALMA is now at the most important and most exciting stage. Currently there are 6 Japanese CSV team members working in Chile. We have almost always one or more Japanese members in the OSF shift ( including visitor scientists like me). We will soon be able to see the first ALMA observation outcome that we have been longing for.